There are definitely opposing views on the subject of multitasking. Some people believe that it’s efficient to be able to do several things at one time, while others feel multitasking takes attention away from each task.  PBS even did a piece on whether multitasking is bad for us, while the New Yorker had an article on multitasking superstars.  Some people really enjoy being hyper-productive and others like to just focus on one thing at a time.

I am a multitasker, and while I feel I am fairly adept at it, I don’t necessarily recommend it for everyone.  What I like about it is the ability to keep myself engaged. Sometimes, I’m working on something (let’s say a blog post) and I temporarily run out of steam or ideas or my butt hurts from sitting. I like to be able to switch gears for a bit and get something else done, like pay a bill or do a bit of research on an upcoming vacation. The break from the main task is inevitable; it’s what I do with the break time that makes me more efficient. I could be surfing Facebook during that time (ok, sometimes I do), or I could be reordering my check books. Some might not see this as multitasking, because the activities aren’t happening concurrently.

Multitasking can mean different things to different people. Some multitasking is acceptable, like taking notes while listening to a lecture, while some isn’t, like eating soup while driving down the highway. While watching TV, I often do other things, like look on my phone, or color or eat. I am not less efficient at any of those things whether I do them together or separately. Other multitasking can be more of an interruption than anything else. Constant phone/computer alerts about email is distracting, because it makes you stop what you’re doing to either check that email or think about checking that email. I’ve turned off all the alerts and, instead, go to email when I have a few minutes to devote to it.

It’s been said that women are better at multitasking than men. It’s a common occurrence for a woman to take care of the needs of several children at once while still cooking dinner. Men, on the other hand, don’t seem to hear the phone ring while they’re watching sports. Top health says it’s because men’s and women’s brains are built differently.

If you find the idea of multitasking appealing, the key is to figure out which tasks fit together well. Tasks that require attention to detail and concentration should be done on their own (like balancing your checkbook and doing your taxes).  Simple tasks can be combined with other simple tasks (like walking on a treadmill and reading). The majority of people (myself included) aren’t good at all types of multitasking, but are good at some.

Multitasking isn’t for everyone 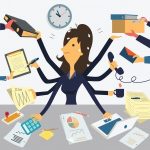