When people learn that I’m a Professional Organizer, they associate it with the show “Hoarders” (which, by the way, I cannot watch at all). They often ask if I work with “Hoarders”. The short answer is…Not really. The longer explanation is that there are 1-5 levels on the Clutter Hoarding Scale. I have worked with levels 1-3, but levels 4 and 5 are best left to those with a background in psychology, because true Hoarding is a psychological disorder.

The word ‘Hoarder’ is thrown around lightly, these days, partly because of the show and party because it’s become a buzz word for anyone who has too much stuff. Many people will tell me that they have so much stuff they’re “practically a hoarder”. Others will smile and say they’re on their way to becoming one, and still others will say they have some clutter, but can’t be “classified as a hoarder”. There is a distinct line between people who are messy/cluttered and those who hoard. That line is defined by a person’s ability to function. Can they cook a meal on the stove, or are there stacks of mail on it? Can they take a shower, or is the tub/shower taken over by boxes? Can they sleep in their bed, or is it covered in clothing? Can they walk safely through their home, or are their possessions in the way?

So I’m here to set the record straight about what hoarding is, and isn’t! The International OCD Foundation Has a very detailed Fact Sheet about Hoarding. They describe Hoarding as having these 3 qualities:
“1. A person collects and keeps a lot of items, even things that appear useless or of little value to most people
2. These items clutter the living spaces and keep the person from using their rooms as they were intended
3.These items cause distress or problems in day-to-day activities.”

People who hoard, have brains that work slightly differently. Their priorities tend to be different, and their rational thinking skills are compromised. People hoard for various reasons.

• Most have experienced a tremendous loss, and their coping mechanism tells them that holding onto items is a way to deal with that loss.
• They assign value to things which have no actual value and therefore feel it is unwise for them to part with the items.
• Their belief that items may be useful someday, which compels them to save more of those items than they could possible ever use.

The people who hoard aren’t the ones who typically call Professional Organizers, or anyone for that matter. Most are ashamed of their spaces and don’t want anyone to know about their issues. The sad fact is that help is typically forced on them when others see their homes. A family member or friend may seek help for a person they believe is hoarding. A landlord may require their apartment to be cleaned up in order to continue to stay in the apartment. And, sadly, many homes of people who hoard only get cleared after they have passed away, which is often a direct cause of the hoarding.

However, like any chronic disorder, there is no easy fix, and cleaning out the home of a person who hoards, before they are ready to do so, can be damaging to them. It also will most definitely result in a continuation of the hoarding behavior, which will bring them right back to the same place they were before their home was cleared.

So the takeaway here is:

• Hoarding is a psychological disorder that requires assistance from a mental health professional, first and foremost.
• “Hoarder” is a derogatory term and not a buzz word.
• Chances are, you don’t have hoarding tendencies, and you just need a bit of help organizing your clutter. 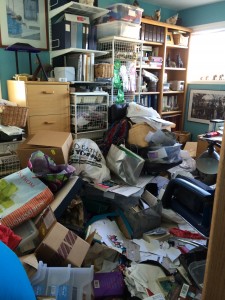 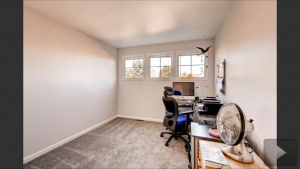 ... other posts by Simplify Me

Copyright © 2012-2021 Simplify Me All rights reserved.
This site is using the Desk Mess Mirrored theme, v2.5, from BuyNowShop.com.